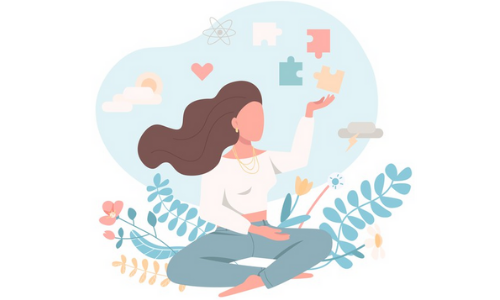 This Women’s Day, the spotlight is on women and their mental health issues, which more often than not are not taken seriously, leading to adverse circumstances. Good mental health and well-being are essential to the overall health of men and women, but some mental health conditions affect women at higher rates than men. Major milestones in their lives that are transitional in nature, such as pregnancy, motherhood, and menopause, have created physical and emotional stresses. Pressures created by them juggling multiple roles in society all combine to account for poor mental health in women. According to Neerrja Birla, the Founder of MPower (an organisation that promotes mental health and well-being), 38% of working women in India show signs of psychiatric morbidity. This issue is worsened by negative experiences like infertility, miscarriages, abuse, domestic and sexual violence, discrimination, unemployment and isolation, which are also known to impact women’s health to a greater extent than men across different countries contexts.

The World Health Organisation (WHO) cites the following data, which denotes women’s mental health is at a higher state of risk.

Gender is an important determinant of mental health and mental illness, which often goes unnoticed. While women and men may appear different in their obvious physical attributes, their gender makes them also differ in how they communicate, deal with emotions and react to stressors. Women’s and men’s brains are structured and wired differently in how they process information and react to events and stimuli, making these differences physical, physiological and psychological.

Studies show that patterns of psychiatric disorders and psychological distress among men and women are very different. A WHO Mental Health Report published nearly two decades ago first showed how depression, anxiety and unspecified psychological distress are common among women. In contrast, addictions, substance abuse and psychopathic personality disorders are more common among men. Genetic and biological factors were seen to play some role in the higher prevalence of depressive and anxiety disorders among women, particularly the hormonal changes that were seen to be associated with women’s reproductive age.

Hormonal fluctuations play a major role in behavioural changes like the hormone estrogen has positive effects on the brain, which protects schizophrenic women from severe symptoms and some aspects of Alzheimer’s. Simultaneously, women produce lesser amounts of serotonin which is a requisite for stabilising moods, leading to them synthesising it much slower than men, which could account for the higher rates of depression.

Depression is 2-3-times as likely to affect women than men, with different contributing factors. The complexity of playing and balancing the roles of mother, wife, employee and caregiver can be a rough path, with many bumps in the road. These mood changes may be in response to everyday happenings like an argument or a small disagreement or responses triggered by hormones due to pregnancy, menstruation or menopause. Social pressures also play a major role in affecting women’s mental health. When these feelings don’t level out in a few days and begin to interfere with daily life activities and relationships, the chances are that these women are going through bouts of depression. Symptoms of depression can range from happening once, intermittently, weeks, months or in some cases, even years.

Anxiety disorders refer to specific psychiatric disorders that involve extreme fear or worry. Studies indicate that women are twice as likely to suffer from anxiety disorders when compared to men, right from childhood to when they hit menopause. Symptoms of anxiety disorder have a wide range, as do most mental health conditions, ranging from feeling nervous, irritable or on edge, increased heart rate, breathing rapidly, sweating or trembling, feeling exhausted, difficulty concentrating, sleep troubles and in some cases, gastrointestinal problems. Women seeking timely treatment can expect an improved quality of life. 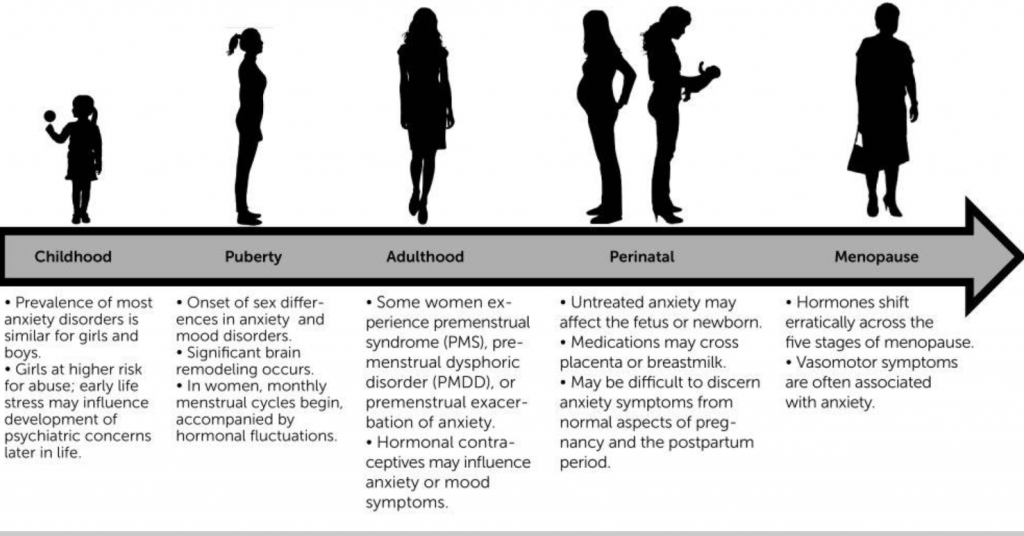 Anxiety Disorders Across the Female Lifespan

Anorexia, bulimia, and binge-eating disorders are serious mental health conditions that can happen to anyone and appear to be more prevalent amongst women. Although eating disorders such as those mentioned above revolve around body image or weight, they are more often about eating behaviours, associated thoughts, attitudes and emotions, and their resulting physiological impairments. For women with these disorders, food tends to become a source of comfort or a method to release stress, and in some cases, losing weight may begin as a way to gain society’s approval. People with eating disorders eat extremely little or too much too unhealthy extremities. Some of these disorders involve self-induced vomiting, laxatives, diet pills, diuretics or over-exercising to produce weight loss. These disorders are dangerous if left untreated, especially since they are associated with one of the highest mortality rates among psychiatric disorders.

Women go through a lot of hormonal changes during and after pregnancy which has psychological and physical changes. 80% of mothers have feelings of sadness, worry, or extreme fatigue in the first few weeks post-childbirth. This change is popularly known as ‘baby blues’ and is common for new mothers. PPD, on the other hand, even though it shares similar symptoms, involves stronger feelings and is felt for a longer time. 15% of new mothers and those who have given birth before are known to have PPD, which causes severe alterations in moods, extreme exhaustion and fatigue and a sense of dread and hopelessness. This intensity of emotions makes it difficult for mothers to care for themselves or their babies. Although serious, treatment such as therapy or prescription drugs can help keep PPD under control.

In the latter half of 2020, the Department of Empowerment of Persons with Disabilities of the Social Justice and Empowerment Ministry launched a mental rehabilitation helpline called the Kiran helpline. While most callers sought help for themselves, others reached out for their parents, siblings, spouse and others. The callers’ challenges were related to anxiety (28.5%) and depression (25.5%). Data shows that only 29.5% of the callers were female, reaching out for help during mental crises. More awareness and education around mental health illnesses will empower more women to seek help when in distress. Timely intervention by family members in first acknowledging the issue and then seeking professional help from mental health professionals will go a long way in saving women’s lives.

With online mental health assessments available from the comfort of your own home, it is now possible to understand what type of mental health condition you are suffering from and get appropriate treatment from psychologists of psychiatrists. Services such as the Kiran helpline (1800-599-0019) offer early screening, psychological first-aid, psychological support, distress management, and referrals to mental health experts. Suicide prevention helplines such as AASRA (9820466726) are available 24/7 to assist.