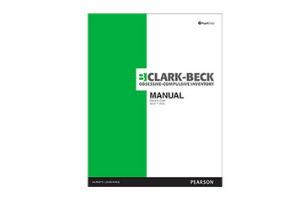 Use a reliable measure of Obsessive-Compulsive Disorder (OCD) modeled after the widely used Beck Depression Inventory®—Second Edition (BDI®–II). The Clark-Beck Obsessive-Compulsive Inventory(CBOCI) is an efficient screener designed to identify obsessive and compulsive symptoms in individuals ages 17 and older.

The 25-item CBOCI was developed to provide you with an efficient, yet comprehensive and precise, self-report screening instrument for OCD. It can be completed in just 10 to 20 minutes and includes 11 items that assess obsessive behaviors and 14 items that assess compulsive behaviors. Once the presence of symptoms has been established, you can follow up with a more intensive diagnostic interview.

This self-report measure of obsessive-compulsive symptoms is patterned after the BDI–II, with a similar response format and structure. The CBOCI can be used in conjunction with the Beck Scalesfor depression, anxiety, hopelessness, and suicide ideation for a more comprehensive measure of psychopathology; this integration can help in understanding possible comorbidity and in formulating and evaluating treatment.

The CBOCI is consistent with current diagnostic criteria for OCD according to the Diagnostic and Statistical Manual of Mental Health Disorders—Fourth Edition (DSM–IV). It also reflects recent advances in theory and research on the key cognitive and behavioral processes underlying Obsessive-Compulsive Disorder.

Western philosophy meets Eastern philosophy at the 2005 ICCP Conference
The Father of Cognitive Therapy speaks with his holiness the 14th Dalai Lama on how emotions, thoughts, and society impact our choices in life. You can experience this once in a lifetime event now.