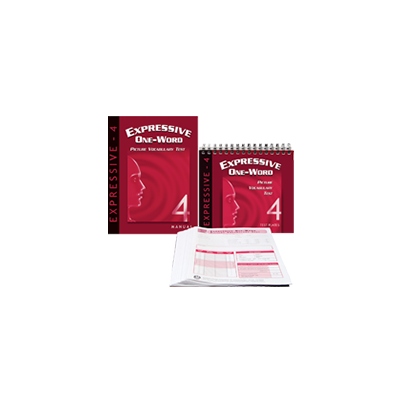 Percentiles based on over 2,000 individuals

Percentiles based on more than 2,000 individuals for the English edition

The ROWPVT-4 and EOWPVT-4 are individually administered, norm-referenced assessments. The ROWPVT-4 tests an individual’s ability to match a spoken word with an image of an object, action, or concept. The EOWPVT-4 tests an individual’s ability to name, with one word, objects, actions, and concepts when presented with color illustrations. The tests target the ability to understand the meaning of words spoken and name what is depicted on a test plate without context.

Both tests were standardized on English-speaking individuals ages 2 through 80+ years residing in the United States.

The ROWPVT-4 and EOWPVT-4 each feature 190 test items with full-color illustrations.

Now with expanded norms (ages 2:0 through 70+), this edition is intended for use with – and was normed on – a bilingual population of individuals who speak Spanish and English with varying levels of proficiency. Because examinees are permitted to respond in either language, the test measures total acquired vocabulary; it is not a test of language proficiency, since language includes grammar and syntax, as well as vocabulary. Norms are separaate from the English 4th editions. The Spanish-bilingual edition (SBE) tests are co-normed, allowing for a comprehensive evaluation of a person’s naming abilities.